Abuelo’s Grand Opening in Tyler Raised $5,000 for CASA for Kids of East Texas

The new Abuelo’s restaurant, located at The Village of Cumberland Park at 8926 South Broadway, raised funds through proceeds from sales during the restaurant’s pre-opening training services, as well as through donations from employees and guests.

“We raised a significant amount of money for a very deserving charity and had a lot of fun in the process,” said Mike Wright, general manager of Abuelo’s Tyler restaurant. “The local community showed wonderful support for CASA for Kids of East Texas, which was awesome. We are thrilled to be able to benefit this outstanding organization that does such great work for children.”

“CASA is happy to accept this wonderful donation from Abuelo’s,” said Michelle McConnell, development director of CASA for Kids of East Texas. “This money will be used to recruit, train and supervise additional volunteer advocates who will speak in court for abused and/or neglected children who have been removed from their homes. Our vision is to provide a volunteer advocate for every child who needs one.  We thank Abuelo’s for helping us get a little closer to fulfilling our vision.”

Since its first opening in 1989, Abuelo’s has consistently been on the leading edge of Mexican cuisine, combining menu creativity, outstanding food and beverage quality, colorful plate presentations and superior service in an impressive Mexican courtyard-themed atmosphere. Owned and operated by Food Concepts International of Lubbock, Texas, Abuelo’s has received national accolades as the top-ranked Mexican food restaurant and as one of America’s top overall restaurant chains in three consecutive biennial surveys by a leading national consumer rating magazine. The company currently has 40 restaurants located in 14 states, and a fast casual Abuelo’s Taqueria, located in Lubbock, Texas. One additional location is currently under construction in The Colony, Texas, with plans to open in January 2016. For more information, visit www.abuelos.com or Abuelo’s Facebook page at www.facebook.com/Abuelos. 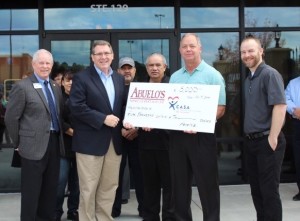